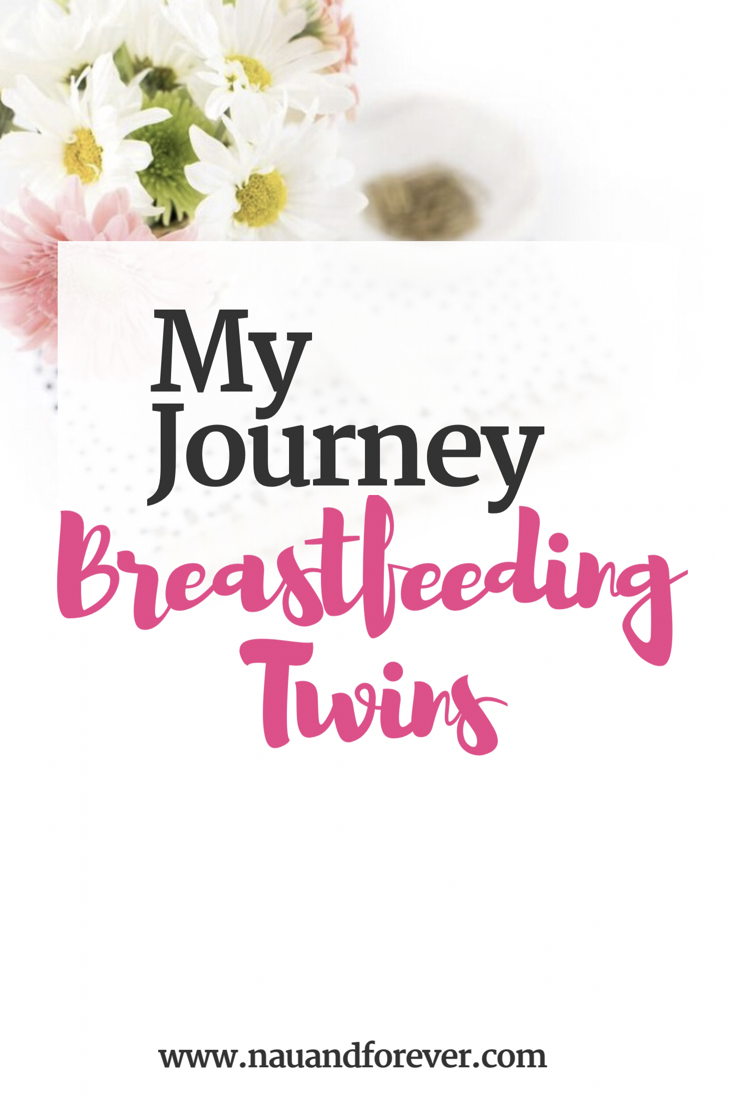 When I first found out that I was pregnant in 2014, I knew I wanted to breastfeed. I did a bit of research and talked with my sister (who was one of the very few breastfeeding mamas I knew at the time) about the breastfeeding journey. When I found out I was pregnant with twins 2 weeks after, I began to wonder if I would be able to do it. Everything I had read up to that point wasn’t very supportive, but I am quite stubborn so I said “I will breastfeed my twins and I don’t care how hard people tell me it will be.”

What a journey it has been..Immediately following my C-section, I was wheeled into recovery and these sweet little girls were placed on my chest for the first time. The nurses helped them latch and they stayed latched for almost 3 years.

I remember being in the hospital and every 2 hours, it would be time to nurse. I would nurse the girls (tandem, which was sooo dang hard with 2 teeny, tiny babies), pump, give them my colostrum, or what we liked to call “liquid gold” with a syringe and then bottle feed them donor milk from the nursery. I was so happy and blessed to know that there were sweet, generous mothers out there that would donate their milk to little babies like mine. This process seemed to take forever each time, but I was determined to do it.

Once we got home, the twins and I camped out in the living room for the first 3 months. The girls were pretty small (birth weight for Baby A was 5 lbs 10 oz and Baby B 4 lbs and 14 oz, both being much smaller when we left the hospital) so I knew that we had to nurse every 2 hours, no excuses. Every 2 hours, I would wake one baby, nurse her for probably 15-20 minutes, lay her down, wake her sister, do the same, then pump for about 20 minutes. I would then lay down, sometimes after eating a gigantic turkey sandwich and chugging a bunch of water, close my eyes for maybe an hour and then do it all over again.

I was beyond exhausted. I was more tired than I had ever been in my entire life. I’ve heard people say that their babies started sleeping through the night at this age or that age. Not these girls! They loved that boobie milk. Sometimes they would go 3 or 4 hours of straight sleep, but that was very rare. I would be lying if I said the first year with twins wasn’t a blur. There were so many tears, mostly from me I think. It was difficult, but I would look at those tiny faces and remember how absolutely blessed I was. They say that God doesn’t give you more than you can handle. I was genuinely shocked at how much He trusted me.

I thought that at 1 year, I would begin weaning. I felt some pressure to do it. My family never pressured me, but I guess hearing some many opinions, especially on social media, I thought, well maybe it’s time.

I remember sitting in the exam room at the girls’ 12 month check up and crying because I didn’t want to wean them yet. I knew in my heart that they weren’t ready and it just didn’t feel like the right decision to make. Our pediatrician was very supportive and told me that I didn’t have to stop if we weren’t ready. My husband agreed and I said “let’s get to 18 months”.

Eighteen months came and went and the next thing I knew we were still nursing at 2 years old. I looked into gentle weaning and half-tried different methods without success. To be honest, I was just too lazy to give any method a real try because I like to sleep. We were co-sleeping and it was just so much easier to let them nurse when they wanted and Mommy could still sleep.

When the girls were almost 28 months old, my husband and I decided to start trying for another baby. Coincidentally, that same month was the return of my period. Yes, it took that long for mine to return. I wasn’t complaining though. As luck would have it, I got pregnant that very same month. Now, I found myself pregnant and still nursing twins. That was when I decided I was 100% ready to end the journey. I wanted to have my body to myself for a bit before I began nursing another child and quite frankly I wasn’t prepared to nurse 3 kiddos.

I spent a lot of time thinking and praying about how we would make this transition. In May, our sweet Carley took a tumble and bit a pretty big gash in her tongue that prevented her from eating solid foods and nursing. This was not the way I wanted her to wean, but it just happened. The first two nights were pretty rough on her, but then by night 3 she had stopped trying.

Then we were left with only Sophie nursing. Both girls are stubborn, but Sophie may be the most stubborn. If she wanted to nurse, you better deliver. Not questions. No hesitations. Give her the boob and no one gets hurt. She had been only nursing once to go to sleep and then once during the night. All of a sudden, she was waking every couple hours to nurse. One day, 2 weeks ago, she said, “Mommy, I nursed and your milk tasted so yummy!” Oh boy, I was not prepared for that. I can only assume that my milk was changing in preparation for the new baby. I knew that if I continued letting her have the yummy milk then I would for sure be following her to college.

I decided to try something that I hadn’t tried before. Desperate times call for desperate measures, right? I sat her down and told her that Mommy’s boobies had boo-boos. Yes, I told my almost 3 year old a little white lie. I had put band aids on my boobs because I knew she would ask to see said boo-boos. I told her that she wouldn’t be able to nurse that night. We talked about it a couple more times throughout the day.

Then the moment of truth came. Bedtime. Our routine had always been. Lay down. Say our prayers. Say “I love you”. Pull out boobie and nurse. Sophie said, “Mommy boobie hurt, no nurse.” She laid next to me, whispered her prayers two more times and then rolled over.

That was it. Just like that our breastfeeding journey had come to an end. The next night was a rough one, but we made it through and she has been weaned for 2.5 weeks now.

Breastfeeding twins has not always been easy, but for us, it was the best decision we could make. The right decision for OUR family. Breastfeeding my sweet girls was definitely an adventure, but one that I am so grateful I was able to do. Yes, there were so many sleepless nights, but you forget how tired you were and instead remember how sweet those rare, quiet moments were at 3 am when the rest of the world was sleeping.

If you are needing encouragement through your journey, I am here. I am no expert. I’m just a Mom that’s been there and done that and want other Moms to know that I care and support you.

10 Reasons Why I Love Winter
Pregnancy Causes What?!
Mommy Meltdown