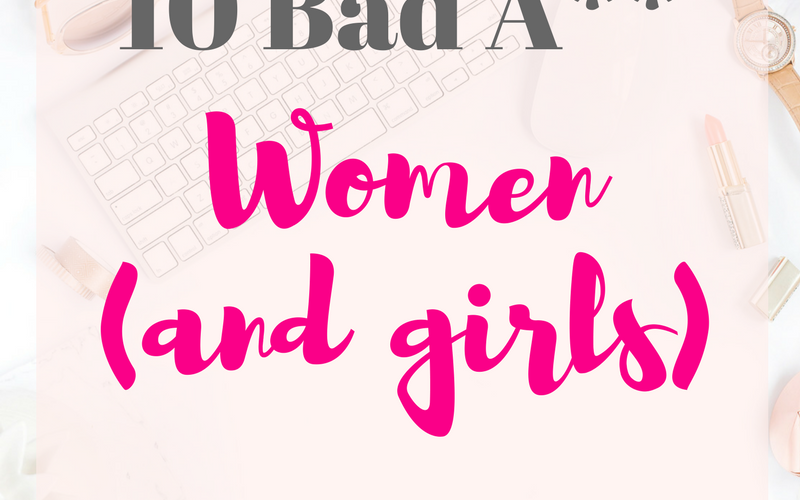 This post contains affiliate links. If you make a purchase, I will make a commission at no charge to you. I only recommend products that I absolutely love!

Leslie Knope. Gosh, I love Leslie. She is the fictional ___ in fictional Pawnee, IN on Parks & Rec. Leslie is the Deputy Director of the Parks Department. She is an extremely optimistic, strong, excited, waffle loving, Galentine celebrating woman. I love how she is always empowering women to be their best!

Matilda Wormwood. She is the precocious 5 year in the book and movie “Matilda”. Neglected by her parents, she teaches herself to read and is extremely intelligent. She is proof that even when you are dealt a bad hand in life, you can persevere with patience and a few pranks.

Ellen DeGeneres. I seriously love her. She is one of the few celebrities that I want to meet. Her kindness and generosity make her a kick ass woman. She brings people together every day through laughter and we all know that laughter is the best medicine.

Maya Angelou. Among many things, Angelou was an actress, poet, and civil rights activist. I love her book “Letter to my Daughter”. I love her strength and determination. Angelou said  “we may encounter many defeats, but we must not be defeated.”

Elizabeth Gilbert. Thanks to her, I have daydreamed of taking a solo trip around the world (Eat Pray Love) and I know I’m not the only one. Gilbert has inspired so many women to “find themselves”. I love and admire her for having the courage to explore the world. To me, that’s pretty bad ass. She inspires people to live beyond fear.

Billie Jean King. I didn’t know her story until the movie “Battle of the Sexes”. After watching it, I went to read more about her and her journey. King fought for equality in the tennis world. She threatened to boycott if women weren’t given the same prize money as their male counterparts. She founded the Women’s Tennis Association in 1973. King played Bobby Riggs  in a “Battle of the Sexes” in and won. She was one of the first openly gay athletes and is a women’s rights activist. King is also known for founding the World TeamTennis coed circuit with her then husband Larry in 1974. (1)

JK Rowling. After she found herself divorced, on welfare and trying to support herself and her daughter, she wrote the first Harry Potter book. Rowling is a perfect example of taking a negative position in your life and using it to persevere. When most people would probably give up, she didn’t.

Valentina Tereshkova. Tereshkova was the first woman to go to space. Wow! And that was in 1963. My 6 year old niece told me the other day that she wanted to go to space. (She thought she would be the first) How incredible it is to hear little girls say they want to do this and to know it’s absolutely possible because of women like Tereshkova. She led the Soviet Committee for Women from 1968 to 1987. Cool fact: Tereshkova even has a crater on the moon named after her! (2)

Katniss Everdeen. Katniss is the bad ass chick from The Hunger Games. After her father died, she took lead of her family, helped people in her village and takes her sister’s place in the Hunger Games and won. She is completely loyal to her loved ones and Miss Independent.

Susan B. Anthony. I can not think of women’s rights without thinking of Susan B. Anthony. President of the National American Woman Suffrage Association, she helped pave the way for women’s right to vote although it wasn’t passed until after years after her death. Without her and women like Elizabeth Cady Stanton (a fellow activist), who knows where we would be. (3)

Want some Inspiring Quotes from Women? Click here and get access to that and my FREE Printables Page!