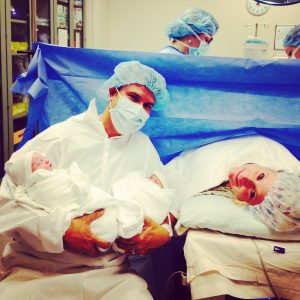 My husband and I married in June of 2013. We decided right away that we would try for a baby. I was so excited, nervous, scared. At the beginning of September, I found out that I was pregnant. A flood of emotions took over. Will it be a boy or girl? What will he or she be like? Will I be a good mom? So many thoughts were running through my head. It’s amazing how quickly seeing those 2 pink lines can change everything.

On September 11, I went into work as usual. It wasn’t long into my morning when I realized something wasn’t right. I went to the restroom and my fear was confirmed. I rushed home to call my doctor and went in for a blood test to confirm what I already knew. The pregnancy was over. The rest of the day was kind of a blur. I remember how hard it was to go into work the next day. My coworkers knew and were so supportive, but I still had to put on the brave face for all our patients that day. And the next day. And the next day.

That weekend was the weekend we were going to tell my family that I was pregnant, instead we had to tell them I had miscarried. My sister was actually having a gender reveal party because she too was expecting. I remember having a family friend come up to me and say, “You’re next!” Ugh. I had to excuse myself. She had no idea what had just taken place and I know she meant well, but those words stung.

My miscarriage was early enough that we were able to try again as soon as possible. On January 2nd, I realized I was a day late, so I took a pregnancy test right before my husband and I left for a weekend getaway/belated honeymoon. There were those 2 pink lines, bright and vibrant. They appeared so quickly, I took a second test. Let’s be honest though, I would have taken the second test anyway. How many times do we need to pee on a stick to confirm the results? Positive! I couldn’t wait for Steve to come home so I could tell him the news. I laid the tests side by side and stood by the counter, shaking. I was so nervous and so excited! I rushed him inside and told him the big news, then we hit the road to celebrate our late honey and baby news.

Having had a previous miscarriage, the doctor wanted me to come in for blood tests to make sure all my levels were increasing as they should. After the third test, I was scheduled for my first ultrasound. I remember that day like it was yesterday. We were in the ultrasound room, Steve on my right, the tech on my left and the monitor right beside me. I had never had an ultrasound before so I wasn’t quite sure what I was looking at. The tech was chatty and then got very quiet. I watched her staring at the screen, moving it back and forth, for what seemed like minutes. I began crying, fearing that something was wrong. I said, “just tell me”. She quickly recovered and said, “Oh, I’m so sorry. It’s twins. I just never know how to tell people because sometimes people aren’t happy to hear that.” TWINS!! We were having twins! I couldn’t believe it. I continued crying, but this time it was tears of joy. Twins. I looked at Steve and just started laughing. He will tell his ears started ringing and thoughts of home renovations danced in his head. We were both over the moon.

I drove home laughing and crying. I’m sure I looked like a crazy person to the other drivers but I just couldn’t believe the news. The craziest part was their due date: September 11. One year after my miscarriage, my rainbow babies were due.

Let’s fast forward to January 2017. I found out I was pregnant again. We did the normal blood work routine and then went in for that first ultrasound. According to her size at that time, the tech said the due date was…September 11; however, going by my last period, we use September 12. I’m fairly convinced that this baby will come a day early though on the 11th.

I find such comfort knowing that God took such a terrible day and made it one to look forward to. He took that day and made it good again and for that I will always be grateful.

The Best Tip for Setting Boundaries As a Christian
Pregnancy Causes What?!
True Life: I'm a Parent